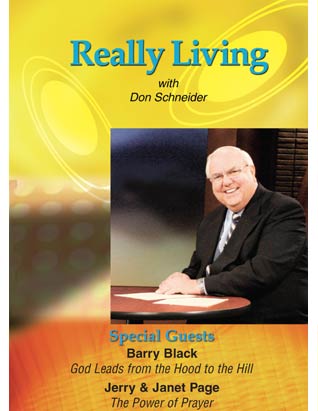 Really Living is a 60-minute television program hosted by Don C. Schneider, president of the North American Division, for the Hope Channel. In each episode, Schneider presents inspiring stories about the lives of people who know Jesus Christ and have experienced Really Living. This DVD contains two 60-minute programs featuring Barry Black and Jerry and Janet Page.

Rear Admiral Barry C. Black (Ret.) was elected the 62nd Chaplain of the United States Senate. In his current position, Black acts as a pastor for 100 senators and their families, plus 7,000 additional staff members. He leads Bible studies, opens each senate session with an invocation, provides a spiritual mentoring class, gives ethical guidance, and speaks around the world representing the Senate. In this interview, Black describes how God brought him from a childhood in the projects to becoming an influential figure on Capitol Hill.

Jerry and Janet Page attribute dramatic events in their life and the lives of those around them to the amazing power of prayer. Learn how the Pages came developed a personal relationship with God through prayer, and discovered that miracles could happen when they prayed. To the Pages, Really Living means spending meaningful time with Jesus and learning to know Him better every day.