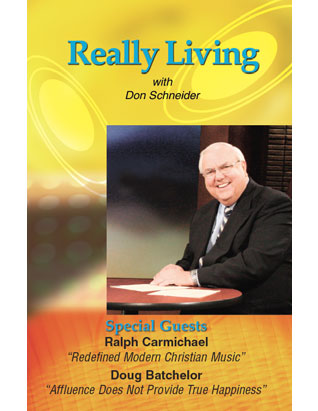 Really Living is a 60-minute television program hosted by Don C. Schneider, president of the North American Division, for the Hope Channel. In each episode, Schneider presents inspiring stories about the lives of people who know Jesus Christ and have experienced Really Living. Each disk contains two 60-minute episodes. This disk contains interviews with Ralph Carmichael and Doug Batchelor.

Redefined Modern Christian Music - Ralph Carmichael chose to pursue music and has been successful in writing Christian hymns and praise songs. Though many were not supportive of his music, he continued to make a difference in the lives of many youth and adults.

Affluence Does Not Provide True Happiness - As a student with attention deficit disorder and dyslexia, Doug Batchelor became disheartened and by age 16 left school to enter a life of stealing and homelessness. He overcame many obstacles including drugs and homelessness to become an influential Christian minister and speaker.