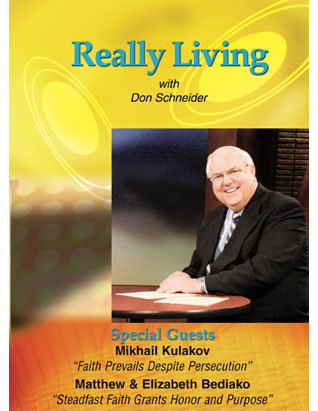 Really Living is a 60-minute television program hosted by Don C. Schneider, president of the North American Division, for the Hope Channel. In each episode, Schneider presents inspiring stories about the lives of people who know Jesus Christ and have experienced Really Living. Each disk contains two 60-minute episodes. This disk contains interviews with Mikhail Kulakov and Matthew and Elizabeth Bediako.

Mikhail Kulakov relates an amazing story of how God cared for him through years of imprisonment and persecution during his life as a Christian minister in the former Soviet Union. Mikhail continued sharing his faith, despite persecution. Mikhail is a retired Seventh-day Adventist Church administrator and is working on translating the Bible into modern Russian.

Learn how did Matthew Bediako, a young man from a small village in Ghana, came to be adopted by the king of his region. Matthew shares the story of how he went from idol worshiper to Christian, and went on to become the first Africa to be a general field secretary and a vice president of the Seventh-day Adventist Church. He is now the General Conference Secretary. Elizabeth shares how she and Matthew partner in ministry.