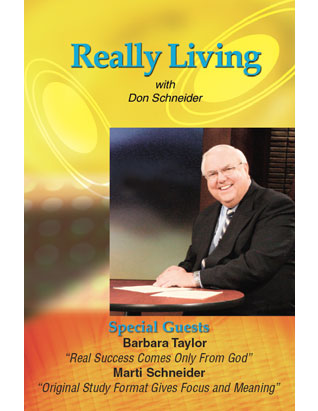 Really Living is a 60-minute television program hosted by Don C. Schneider, president of the North American Division, for the Hope Channel. In each episode, Schneider presents inspiring stories about the lives of people who know Jesus Christ and have experienced Really Living. Each disk contains two 60-minute episodes. This disk contains interviews with Barbara Taylor and Marti Schneider.

Real Success Comes Only From God - Barbara Taylor was living the high life, but she felt she was missing something. She became rich working as the director of a major hotel chain and manager of a magazine, though she realized she wanted more than her current life had to offer. She decided to join the Adventist Church after studying the Bible. Soon after, she decided to plant a church in Copper Mountain, Colorado. Hear the stories of people whose lives have changed after attending the church plant.duration 50:06

Original Study Format Gives Focus and Meaning- Marti Schneider joins Don to discuss her style of daily Bible study and the incredible impact it has made on her life. While Marti grew up in the church, she started really living when she began in-depth Bible study. Marti shares her methods of studying and suggests ways that people can strengthen their relationship with Jesus through finding their own way to study the Bible.duration 50:46