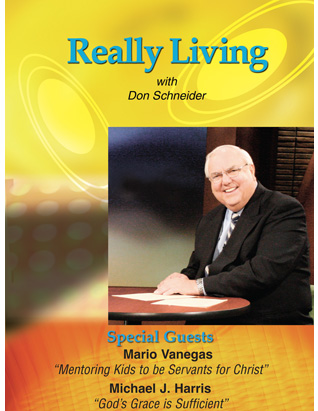 Really Living is a 60-minute television program hosted by Don C. Schneider, past president of the North American Division, for the Hope Channel. In each episode, Schneider presents inspiring stories about the lives of people who know Jesus Christ and have experienced Really Living. This DVD contains two programs featuring Mario Vanegas and Michael C. Harris.

Mario Vanegas – Mentoring Kids to be Servants for Christ

As a young man in El Salvado, Mario Vanegas reluctantly joined the army to protect his family after fighting broke out in their community. Watch this episode to learn how Vanegas escaped the country and met Jesus, and returned home to share his new Friend with his family. Today Vanegas maintains a passion for working with youth through the Pathfinder Club and serving others any way he can. 49:34

Watch this episode of Really Living to learn about Michael J. Harris’s miraculous deliverance from drugs and alcohol, and how God’s grace helped restore his marriage following an accident that resulted in his wife’s paralysis. Harris is now a well-known Christian recording artist who devotes his spare time to helping others find freedom in Jesus. 50:01