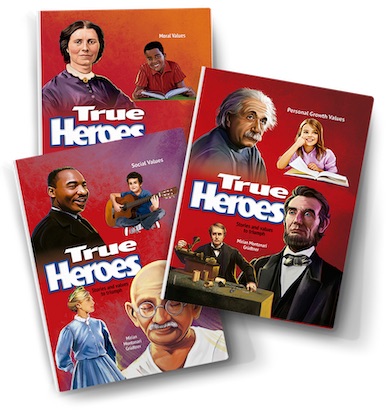 Social Values – Throughout history, many people have become famous. However, individuals like Gandhi, Mandela and Martin Luther King not only became famous but were also true heroes. In True Heroes, you will find the powerful stories of these characters. These stories will help you develop the same values so you can also live a fulfilling and meaningful life. These social and spiritual values include idealism, loyalty, solidarity, respect for the environment, altruism, hope and unconditional love, to mention a few.

Personal Growth Values – Success does not happen by chance. It is the result of the search and development of personal growth such as the discipline illustrated in the life of Helen Keller, prudence as seen in the story of the Indian, responsibility as shown by Juan Carlos and Julia, creativity as displayed by Louis Braille, perseverance as shown in the story of the life of Thomas Alva Edison, and many more.

Moral Values – This book presents the lives of some historical figures in simple and attractive ways to help you learn from them. These heroes were not highly gifted; they did not have supernatural features. They were just ordinary men and women like most of us. But what have they done to receive such recognition? The answer is very easy but very complex at the same time: they lived above-average lives and were driven by a noble mission and purpose in life. The values they developed, their reactions in the face of adversity and prosperity and their attitude in dealing with apparently insignificant situations in life influenced the great decisions they made which later shaped their destinies.