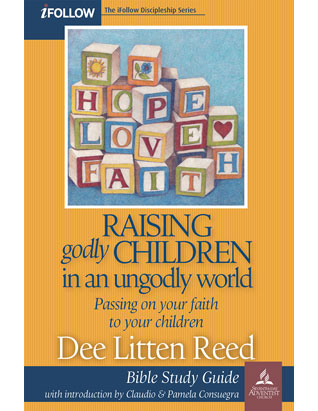 We’re committed. The Seventh-day Adventist Church is committed to preaching the gospel throughout the world, but we’re also committed to something a little closer to home: raising godly children in an ungodly world. This is our most precious and important job. If we send the Good News throughout the world but ignore the spiritual needs of our own children and the children in our congregation, then what have we accomplished?

This is not a book about perfection in parenting. It was not written entirely through inspiration from God. It was not even written by a person who raised perfect children. Instead of filling the pages of the book with tales of her faultless parenting, Dee Litten Reed writes honestly about the struggles, work, frustration, and joys of raising children for God’s kingdom. In addition to personal anecdotes, the author invited family, friends, and colleagues to contribute their experiences. You’ll find the text of this book educational, encouraging, and also a bit sobering about the task God has given you: raising godly children in an ungodly world.

Dee Litten Reed graduated with a degree in Interdisciplinary Studies from the New York Institute of Technology in 2006. It sounds like she should be young, but in actuality she took four decades to earn that diploma, having begun her degree in the ’60s at Columbia Union College. Her dream of a college education was sidelined when she became a wife and mother, which she describes as her highest calling. Reed has been involved in mentoring and teaching children since she first worked in Kindergarten Sabbath School at Loma Linda University Church. Her proudest accomplishment has been raising two children to know and love Jesus.