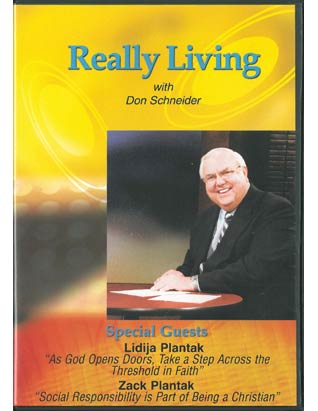 Really Living is a television program hosted by Don C. Schneider, past president of the North American Division, for the Hope Channel. In each episode, Schneider presents inspiring stories about the lives of people who know Jesus Christ and have experienced Really Living. This DVD contains two programs featuring Lidija Plantak and Zack Plantak.

Lidija Plantak—As God Opens Doors, Take a Step Across the Threshold in Faith

Lidija Plantak grew up in Yugoslavia, where her music training began at a very young age. Her father was a pastor and her family ministered in a Communist area where they worked to complete a church building project. However, the Communist officials made it difficult for Lidija’s father to complete his project and for Lidija to complete her education. Watch this episode to learn how Really Living means being true to Jesus, even when you can’t see His plan for your life. Duration: 51:31

Zack Plantak—Social Responsibility is Part of Being a Christian

For Zack Plantack, Really Living means allowing God to lead your life, following His direction, embracing what He has given you, and looking forward to where He will lead in the future. In this episode, Zach discusses how the Lord lead him from a childhood in Communist Yugoslavia to pastoral work in England and teaching in the US. Through his experiences, Zach has developed a passion for helping the poor and showing Christ’s character to everyone he meets. Duration: 50:15